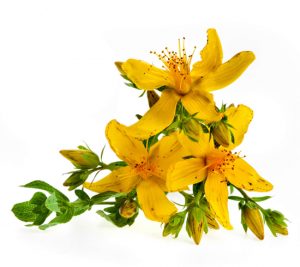 There are various explanations for its association with John the Baptist. During one version, called wort Baptist because he was of the “locusts”, ie the edges of the plants that nourish the Baptistis desert. During another aspect, owes its name to the translucent red and black spots on its petals, which was interpreted as a symbol of the blood of Saint John, with transparent dots of petals were a symbol of tears spilled when beheaded.

Made from extra virgin olive oil and sedge.

Oil with many beneficial properties.

The color is deep ruby ​​as left becomes even more intense. Collect the sedge late May to June and as fresh Place in bowl with oil.

Leave it in the sun for 40 days, strain it and spend miraculous St. John’s Wort Oil. Immediately after harvest must get into the oil. If you leave it to dry and then put it in the oil will lose half the ingredients of the product. Its use requires St. John’s Wort Oil avoid exposure to sun time taken, because it can cause skin problems.

Precautions: The Hypericum can affect the liver causing sensitivity to light. In some skins can cause photosensitivity reaction and photodermatitis, manifested by skin irritation, including the mouth, nose and ears. There should then use to follow exposure to light.

Its use will be ST.JOHNSWORT OIL daily 2-3 times a day for a period up to eliminate such problem. You will see for yourselves personally, the healing properties of sedge as a medicinal plant in St. John’s Wort Oil.

Only the MT U.S. today 500,000 acres are grown plant. But the great promise of this plant is its contribution to the treatment of AIDS! Many AIDS patients received beneficial use of the plant, said more optimistic, with more energy and less fatigue. Studies show an increase or stabilize Tlemfokyttaron
for a long time.

Contains among others: hypericin and psefdouperikini, flavonoids (16% in the leaves), xanthones, phenolic acids, essential oils (0.13% in the entire plant).

The analgesic properties of the herb was said that the first due to substances hypericin, pseudohypericin, and staflavonoeidi, but according to recent pharmacological studies and clinical results focus on a particular active substance
herb to hyperforin.